A robust analysis must be conducted to ascertain the uniqueness of Liberia’s culture that has a pre-republic importance and a post-republic importance and the effects of both cultures infusing to create a unique society that should be studied and admired irrespective of the difficulties that surrounded the founding of the republic.

New York Harbor was frozen, and the ship with its 88 passengers, all free-born, was stuck in the ice and unable to sail.  Arthur Tappan, the wealthy merchant, and philanthropist were among the crowd watching the departure. Apparently knowledgeable about such things, Tappan supervised the ship’s crew in freeing the ship from the ice and the ship left the dock, bound for Sierra Leone.

They spent two years near Sherbro, Sierra Leone as ACS and US Navy officials negotiated for land for the colony. After several failed attempts, deaths and illnesses from malaria and yellow fever, and other hardships, the land was finally secured on Cape Mesurado, and in 1822, the surviving colonists under the leadership of Elijah Johnson landed on Providence Island. 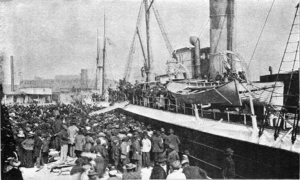