The intent of the rebirth which by its very definition is “a situation or period of time when there is a new interest in something that has not been popular in a long time”; a period of new growth or activity.  The Liberian rebirth will encompass those factors that provided ideas to the Harlem rebirth of the early 1920’s to the late 1930’s. To establish the rebirth on the basis of intellect and production of literature, art, history and music to change the dynamics of the Liberian situation and place the initial intent of the nation back on track to its earliest principles.  These principles included self-sufficiency, uniqueness and the propensity of any black person irrespective of class to endeavor to become the very best.  My approach to the Liberian rebirth encompasses more than a structural remediation but bears a holistic approach on the ability of the populace to engage in the self-sufficiency in agriculture, health care, security and  manufacturing  that would transcend the current conditions leading the nation to an arena that has not been seen since the period of 1971 to 1980.  Analyzing the methods that were used in the Tolbert administration such as Total Involvement for Higher Heights, Rally Time, and from Mat to Mattress, produced a more equitable and functioning society.  His humanistic capitalism and war against what he considered to be the scourges and obstacles to our development not only in Liberia but on the African continent were ignorance, disease and poverty.

Lofa_Mano National Park- Gbarpolu- This should be incorporated officially similar to the Sapo National Park.  Sapo National Park- Sino.  Second largest rain forest in Africa with vast biodiversity and animal and plant life.  Liberia has one of the best seafood’s off its shores.  Rainfall is one of the highest in the world that can lead to vast supplies of hydroelectricity.  Largest rubber plantation and soon to be a vast plantation of oil palm.  Diamonds, gold, bauxite, iron ore, timber, oil, biodiversity, human capital all have the potentials that can transform the nation.  Government should have a plan in place for a gold reserve to allow an allocation of gold to be placed in reserve and used for any potential future problems.

Coat of Arms: Liberia’s coat of arms features a shield displaying a picture of a 19th century ship arriving to the country (a symbol of the freed slaves brought from the United States). Below the shield is the name of the country displayed on a ribbon, and above is the national motto.  As a model to create for tourist and historical relevance, building full scale replicas of the ships used to bring the returning Africans to the West African shore.

Within the shield are several elements, including: a plow and shovel (representing dignity and labor), a rising sun (the birth of a nation), a palm tree (prosperity) and a white dove (for breath of peace). Motto: “The love of liberty brought us here.”

and white stripes represent the eleven signers of the Liberian Declaration of Independence. The white star is symbolic of African Unity.  The blue area signifies the African continent. 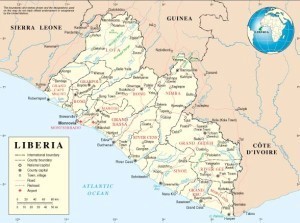