Founded in 1822 by repatriated Africans from the Western Hemisphere mostly from the Antebellum south of the United States and the Caribbean, the new nation was first a colony under the auspices of the American Colonization Society.  The colony was administered by whites until under the first black governor, Joseph Jenkins Roberts. Tensions had ensued between those African groups that had migrated to this area known at the time as the Grain Coast several centuries earlier and those that were considered settler class and erroneously in the future referred to as Americo-Liberians. 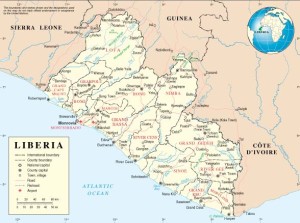 “Our African heritage and culture are woven into the very fabric of our being. We should encourage our youth and our children to embark on a journey that is rewarding as well as self-empowering.”

REPUBLIC OF LIBERIA received its independence on July 26, 1847.

Portuguese explorers established contacts with the territory that is now the geographic location of the Republic of Liberia as early as 1461 and named the area the Grain Coast because of the abundance of grains of Malagueta Pepper. In 1663 the British installed trading posts on the Grain Coast, but the Dutch destroyed these posts a year later. There were no further reports of European settlements along the Grain Coast until the arrival of the repatriated Africans in the early 1800s. Liberia, which means “land of the free,” was founded by freed Africans from the United States in 1820. These freed Africans, which would erroneously be called Americo-Liberians, first arrived in Liberia and established a settlement in Christopolis (city of Christ) now Monrovia (village of Monroe) which was renamed for James Monroe as a gesture due to the support received by the American president on February 6, 1820. This group of 86 immigrants formed the nucleus of the settler population of what became known as the Republic of Liberia. Thousands of freedmen and women from the Americas soon arrived during the preceding years leading toward the formation of more settlements culminating into a declaration of independence on July 26, 1847 of the Republic of Liberia. The idea of resettling free Africans in Africa was nurtured by the American Colonization Society (ACS), an organization that governed the Commonwealth of Liberia until independence in 1847. The new Republic of Liberia adopted American styles of life and established thriving trade links with other West Africans. The formation of the Republic of Liberia was not an altogether easy task.

The settlers periodically encountered stiff opposition from African groups whom they met upon arrival, usually resulting in bloody battles. On the other hand, the newly independent Liberia was encroached upon by colonial expansionists who forcefully took over much of the original territory of independent Liberia. Liberia’s history until 1980 was largely peaceful.  For 133 years after independence, the Republic of Liberia had two parties, the Republican and the Whig party which was transformed into the True Whig party which held power and maintained a one-party state rule from the 1940’s to 1980.  Joseph Jenkins Roberts who was born and raised in America became Liberia’s first president. The style of government and constitution was a Republic with aspects similar to that of the United States. The True Whig Party dominated all sectors of Liberia from 1940’s until April 12, 1980 when a native Master Sergeant Samuel K. Doe, from the Krahn ethnic group, seized power in a coup d’état.  Doe’s forces allegedly executed the 19th president William R. Tolbert and his PRC military tribunal sentenced several officials of his government mostly of settler descent to a public execution. As a result, 133 years of settler political domination ended with the formation of the People’s Redemption Council (PRC).  This was fragmented as the economy became fragile, the educated class left Liberia and there were ethnic tensions between Doe’s ethnic group and others within the nation.  This culminated with a civil war in 1989 which led to the destruction of the Republic’s institutions, economy, and infrastructure.  There were a brain drain, economic flight and a level of debauchery, savagery, and lunacy never seen in its near 168 years of existence.  Currently, Liberia is making a comeback but she has a long road ahead but the future seems so much brighter today than yesterday.  Please view more on Wikipedia.  https://en.wikipedia.org/wiki/Liberia